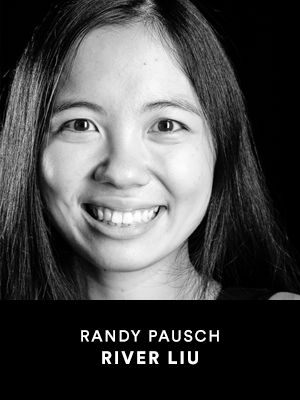 How do you see interactive storytelling evolving in VR games?

I see VR games as an interesting but not well defined media for interactive storytelling. It’s interesting because player embodiment in VR games opens up more exciting and intuitive ways of interactions. Embodiment itself has also been proved to be efficient in emotionally engaging people, which is the core of good storytelling.

VR storytelling is promising, but it is still emerging. The language of VR storytelling is not well defined. Not yet. Motion sickness and uncomfortableness is another big issue for VR games. That means the length of one experience cannot be too long, among all the other constraints. Player has to navigate through the story in a very short time, usually within 10 minutes, compared to a classic 40 hours long RPG gameplay on PC. It demands a different approach to tell stories in VR games. Defining the language of VR storytelling is the job for every VR game developers of the age, and I am excited to be one of them.

Tell me some of your insights from your research into AI systems. How have you applied that research to your later game projects?

In my previous life, before I developed an interest in game AI systems, I was a researcher in university working on the other kind of AI--Artificial Neural Networks--which, frankly speaking, is pure math. Game AI is something really different. It cares more about creating an interesting experience for the players, than machine learning pe se. So the responses from game AI systems are usually more constrained and superiorly designed and planned. That’s something I didn’t really know about before I entered this area.

Game AI is not just about the NPCs or human-like characters, but also about the environment, and everything else in the game world that the player can touch and feel. It has gone through a long way in the last decade, from the basic state machines, to simple behavior trees, to hierarchical systems, to hybrid systems, to backward planners, to forward planners, and so on. It leverages on the studies of classical AI and auto-computation, and apply them to games in innovative ways.

My approach to studying game AIs was straightforward. I prototyped them and created games. I am naturally attracted to new methodologies, and the best way to study, I believe, is to build it from scratch.

What are your favorite games and why?

One of my favorite games I played this year is The Last of Us from Naughty Dog. It is an action-adventure game, where the player escorts a little girl called Ellie across a post-apocalyptic land, while defending against hostile humans and infected characters. I love the game for mainly two reasons. I like its cinematic view and lighting. But more than that, I like its amazing buddy AI system for Ellie and the other companion characters. It fits well with the story; it creates memorable moments; it is there to help the player, not interfere or make the game easier; it is smart, at least smarter than the player; and most of all, it really develops and enforces the emotional relationship between the player and Ellie. The more I played, the more I felt that it took the design and implementation of companion AI systems to a new level.

Tell me more about your Tuesday Night Games initiative. What are some lessons you've taken away from these rapid prototyping sessions?

Tuesday Night Games started as a programming and design practice to create mini games in one week rotations. For each week I prototyped a core mechanic for a selected game genre based on a theme, then iterated on it, playtested it extensively, polished the game as I could and published it, all in under 7 days, or 30 hours, while continued my 60 hours day job as a VR storyteller for games. It was intense, indeed. But it was also a lot of fun. Prototyping can bring an idea alive in a couple of hours, so I can test if it is good or bad. It is also a great way to implement new systems with the minimum cost.

Although my main focus was the programming part, but as the one and only developer of Tuesday Night Games, I had to create all the art assets by myself, write the narrative scripts and sometimes even compose the game music. All of my art, literature and music training from the childhood now all came together for one thing. But I could not move further without the help from my dear friends, especially my musician friends who helped me with most of the music pieces and sound effects, and my playtester friends who helped me identify the problems and flaws, my moral supporting friends who encouraged me all the way, and of course, my mentors from ETC and the industry. I owe a huge debt of gratitude to them.

I learnt so many things from Tuesday Night Games. I got great experience in fast prototyping. I did a lot of deconstruction and re-engineering, which helped me to gain a deeper understanding of different game genres and interesting mechanics. I kept improving my programming design to build more reliable and robust systems. And last but not least, I developed a deeper appreciation for people taking different roles.

You spoke briefly about your multidisciplinary background. How has this helped you in team projects?

I received a classical training in fine art and music as a child, thanks to my parents, and I read a lot in anthropology, history, literature, philosophy and science in a very young age. In adulthood, I got my first master's degree in History, besides my degree of Electronic Engineering. I was many things. I was a graphic researcher, a contract science reporter for the Scientific American Chinese edition, an editor, a leader in an archaeology group, a freelance illustrator, a UI designer, a museum docent, and a full-stack web and server developer in a startup.

All of these experiences helped me in team projects in so many ways. Working with clients taught me how to communicate ideas and get feedbacks smartly and efficiently. Being a leader taught me about team dynamics. Having my own one-man studio and doing freelance jobs taught me to manage time well and be precise about details. A broader knowledge background gave me some unique aspects to things--for example, I value statistics, science researches and human psychology a lot when making design and creative decisions. And more importantly, I can understand the work of my teammates and fellow developers in great details, and assist them with my engineering.

As a female programmer in games, what are some ways you believe the industry could encourage and inspire more women to enter the field?

I don’t want to stress my identity. But I am concerned about how few of female coders work in the game industry. I used to joke with my friends that when I went to a game showcase to demonstrate my indie projects, I was the only female game developer there; when I finally went to a hackathon for women who code, I was still the only female game developer there. It is a sad joke, for an industry which has a long history with female engagement until the recent decades. Back to the 80s and 90s, there used to be so many female pioneers standing at the frontier of computer games and pushing the boundary forward. But there are so few of female developers, not just programmers, working in the industry nowadays.

Statistics suggested that the changing of landscape might be related to the shifting of audiences for games in the mid-90s. Since then, the game culture has become more male-oriented, more hyper-masculine, and more uniformed. The losing of female communities and the shifting of the game market led to a lot of female developers leaving the industry, and fewer young female developers joining in. But video games were not always men’s history. There was a more opened and diverse landscape before. I want to believe that, with the awareness, and with the engagement of more female developers in the field, the current situation can be changed.

For the industry to encourage more women to enter this field, one thing is to create games that involves more female players, and gradually builds up a female game community. It sometimes means the introduction of playable and strong female characters in games, especially action and FPS games. Overwatch did a pretty good job for that. Another thing is to tell the stories of female leaders and developers who used to work or is currently working in the field, loudly and often, to send a message to young girls and women who are interested in this fascinating field: chasing your dream as you want, you shall not be alone.

After graduation, what is a dream game project you'd like to work on?

My goal in the game industry is to further expand the game AI domain, especially for action-adventure games. I want to create AIs that are more immersive, and allow for new gameplay experience the world has never seen. I would love to work in an AI team that encourages creative freedom and explorations, and create games that are emotionally engaging and tell good stories that touch the bottom of hearts. Such games would be a piece of art created by collaborative efforts, shared with a variety of disciplines, genders and cultures.

Return to the scholarship winners page.